I had heard some pretty scary things about traveling in China: that it was just a really difficult country, that Westerners were stared at relentlessly, that the pollution is enough to literally knock you down.

Despite all that, I made a last-minute decision to skip exploring more of Laos in favor of heading north to Beijing, where I could crash with family for a week. A decision made partly out of loneliness and partly out of the attitude of, “Well, if I don’t go to China now, I’m never going,” turned out to be one of the best choices I’ve made on this trip.

Simply put, China was awesome. I had spent the past five weeks traveling solo – which, in Southeast Asia, is easy to do and there are plenty of people to talk to, but the simple act of having to navigate new cities and figure out places to eat and sort out sleeping arrangements is really exhausting. By this point, I had done it in five different cities in two countries.

By contrast, I think I had the easiest tourist trip to Beijing that anyone has ever had. I stayed in a beautiful, huge apartment with my cousin and his wife and finally experienced a bed that wasn’t Asia-style rock hard. I mean, the floors in the apartment were even heated! AND since they have a DPO box they can get deliveries from Amazon for all their non-perishables – hello, Crispix. Allow me to eat this entire box over the next week.

Besides experiencing the comforts of home, I just had a deliciously easy and relaxed week. I didn’t have to make a single restaurant choice, and when I did go out to eat, it was with two people who speak Mandarin. More than that, I got to do exquisitely normal things – after more than a month of every day being exciting but challenging, this was incredible. I went grocery shopping with my cousin (and got to watch him charm the fruit ladies with his Mandarin and as a result get tons of free fruit to munch while we shopped). We went out with his friends and played trivia over pizza and beer. I lazily watched a bunch of (totally legal) movies. And did I mention the heated floors?

And yes – the weather was cold and the pollution pretty terrible, at least for the first few days. My second full day there, the day started at about 520 (the scale to measure Air Quality only goes up to 500, by the way). That afternoon was a bit more clear but SO windy that I think I saw a woman on a bicycle flying by. But the bonus of that wind? It shoved all the pollution out, giving us some gorgeous blue sky days right as the weather warmed up to the 60s.

I managed to do some touristy things, namely the Forbidden City, the Great Wall, and the Temple of Heaven. But besides that, I just took it supremely easy, indulging in Reese’s Cups, trips to their gym, and a Chinese massage that literally involved hammers (much to my surprise).

It was with reluctance that I left such a comfortable environment. But it was time to head south so I could continue with the final leg of my trip – Pops and Daughter McCarthy take on Cambodia and Vietnam!

I sat alone in the cable car and suddenly started to talk out loud to myself. “I have no idea what is happening next, in any facet of my life. All I know is where I have been and where I am right now.” This comes out as almost a nervous chant, a reassurance to myself as I stand on the edge of the abyss. Never before have I felt as aimless, as misdirected. My paths have always been clear. Now all I know is what is right in front of me: the Great Wall of China.

**
I pass group after group of tourists on a pilgrimage, as I am. Whether to tick something off the bucket list, learn more about Chinese history, or try to put their own lives and concerns into perspective, we are all dumfounded by the massive amounts of stone and memory in front of us.

**
I haven’t been this cold in weeks. I’m bundled in three tops, two pairs of pants, a puffy white coat, a sarong I’ve fashioned into a scarf, a homemade hat, and mismatched globes. But I step on the stone, lay my hands on the wall, and will my shivers (and the memory of past shivers) to temporary stillness. I am here. 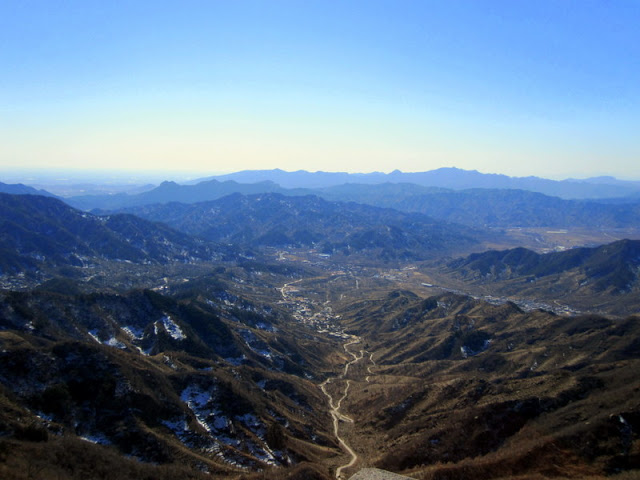 **
As I walk, I shed item after item of clothing as my mind sinks deeper into reflection. It’s almost required in a place such as this, deep in the Chinese mountainside.
I have my own “great walls.” At this moment, I have those emotional and mental blockades preventing me from reaching through to the other side. Whether these blocks are protecting me or imprisoning me, I don’t know. What is on the other side, I don’t know.

**
Now I sit directly on the wall, the mid-day sun warming my knees. It’s an astonishingly clear day: a bit of irony to this clouded mind. I’m sitting on this solid reminder of past, present, and future, as I contemplate my history, stumble through my days, and try to map what’s next.
There is no map. There is not even a cartographer who can assist me. The stretch of stone path in front of me is all I have. 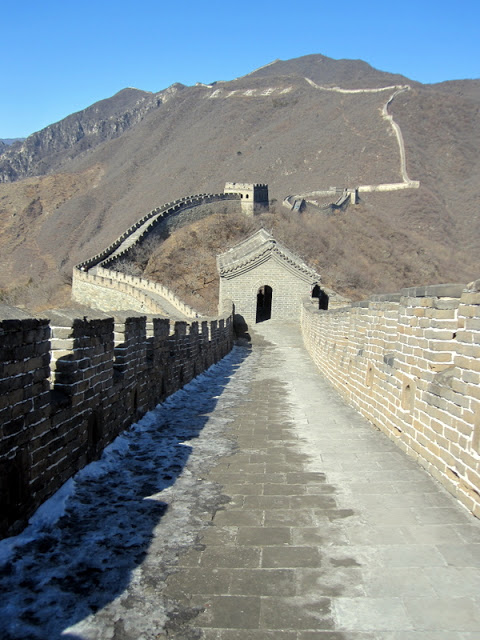 Before I left, I had two faces that I would put on while discussing my travel plans. One would have me discussing my precise itinerary, while the other would feature a much more relaxed Kristen saying “Ohhh who knows? We’ll see what happens!” (That’s kind of the persona I put on when I was talking about my plans in this post.)

In both instances, and even when I left, I told people that I had my lodgings and plans set for the first few days, but after that I was going to see what would happen. Look how casual I can be!

Well, within just a few days traveling solo, I quickly realized that all of my assumptions were incorrect.

I basically upended my travels plans within the first 48 hours. I couldn’t spend a week in muggy, chaotic Bangkok, and escaped down to the coast of Thailand faster than I thought. I can’t stand the thought of having to move around more than is necessary, lugging my bag from place to place, so island hopping is out too. Instead, I parked myself for two weeks in Koh Lanta. And then – surprise! – I did get up to northern Thailand, specifically Chiang Mai.

The biggest surprise to me? I decided to go to China.

China had been part of my original itinerary, but then cut out when I decided to stick to SEA. Literally two days before leaving when I was in the throes of WHAT AM I DOING THIS IS CRAZY I AM GOING TO FAIL (which was really fun for everyone involved, I think), I decided that if it all got to be too much I would use going to Beijing as a crutch. (I have family living there.)

Within a few days of arrival, I decided to go ahead and book China. At that point, I was still using it as a crutch, the quintessential, “Okay, only two more weeks of traveling solo before I’m in the bosom of family,” and so on.

Traveling solo is funny; specifically, the wildly vacillating emotions I go through on a daily – nay, hourly – basis is almost comical. One hour I receive bad news and want nothing more than a hug from someone who loves me; the next, I’m wandering down the street, musing about how I could have totally done solo travel for another week.

I’m almost glad for that realization, and the realization that I’ve already been in Thailand for a month alone without even really noticing. While I could have easily done another week, two weeks, or probably even more without breaking a sweat, I’m glad that I will soon be with family (as is my mother). I can explore an entirely new place and receive a bit of comfort at the same time. I don’t have to be on all the freakin’ time.

Babies pooping on the street, terrible air pollution, and suspicious food – I’m coming for you!