My reasons for loving the television show Gilmore Girls are certainly not unusual ones. I love it because of the mother-daughter relationship, and the strong relationship I have with my own mother; I love it because I love seeing a main female character who just loves reading and learning and that’s okay; I love it because who doesn’t want to live in Stars Hollow?!?! More than the plot itself, I’ve come to also love it for critical reasons: the writing is sharp, the dialogue is equal parts hilarious and gut-wrenching, (most of) the story development is strong; and it is just a genuinely strong piece of television history.

Gilmore Girls has featured in almost every major milestone in my life. I don’t remember when I first started watching it – I don’t think it was right from the beginning, but surely it wasn’t too deep into the series – but it became our mother-daughter tradition to watch it religiously every week. We eagerly bought the DVDs sets (and termed the DVD menu background song “The la-las”) and watched them constantly. In fact, my father – who was most often on his computer in the loft above our living room – boasts that he’s heard almost every episode, although he’s literally seen almost none of them. He would sometimes surprise us by saying things like, “I can’t believe what Luke did this week, can you?”

So, Gilmore Girls established itself in my life as a show that demonstrates the bond of mother-daughter relationships, normalizes them, and most importantly, made it okay to say that your mom is your best friend. We continued to bond over the show as it entered its 7th and final season in the original run, and I started my first year of college. While we couldn’t watch together, my mom saved the series finale for me on our TV at home and we watched it together, just like old times.

I continued to watch the show religiously in my mid-20s, post-grad school and very much unemployed. I actually DVRed the episode ABC Family played every day at 11am and looked forward to my daily watching ritual – never mind the fact that we owned all seven seasons and I could watch any episode at any time, without commercials. (Sometimes you just want someone to pick for you, you know?)

I dove deeper into the fandom when I discovered the Gilmore Guys podcast and learned how to think critically about one of my top two favorite television shows (Buffy being the other). It’s by no means a perfect show – Rory and Lorelai are often garbage people, and most of Rory’s boyfriends weren’t really that great (although I am definitely #TeamLogan for the original series). But, the community it brings together, and the fandom is brought back into my life, has been an integral part of the last two years of my life.

So, imagine my excitement when Gilmore Girls: A Year In the Life was announced. Finally, more episodes from one of the best shows on television, with the ending as originally envisioned by the series showrunner and written by a damn amazing lady (ASP, we love you). There are definite flaws in the new episodes, and things I didn’t love, but overall I was as pleased as punch to see my three favorite Gilmore girls back in Connecticut. (And yes – I actually LOVED the Rory storyline).

The only thing I didn’t love was that I wasn’t able to watch it with my mother, as she was selfishly living out her retirement dream and sailing to the Bahamas at the time. But, she’s saving her first viewing of the new episodes for when I’m home for Christmas. And so, we will settle in with popcorn and wine (something we couldn’t do the first time around), and likely cry together when we hear the “la las” and get to see our female role models.

In short: Moms are cool, my mom is amazing, and this show is everything to me. 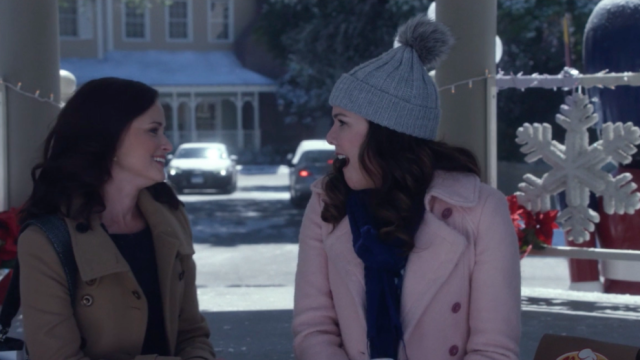