I’m doing it, folks – I’m keeping up with my bookish New Year’s resolutions! (Except for pledging to read a classic novel by a female author every quarter. Whoops. Jane Eyre, I’m still coming for you!).

The resolution I kept this month? Reading more non-fiction. All the Single Ladies: Unmarried Women and the Rise of an Independent Nation (Rebecca Traister) has been on my read list for a while now, since it landed on the “Best Books of 2016” books.

There were a lot of really interesting takeaways in this book, which explores the historical role of women in American society and how social, political, and economic events have impacted how they are viewed – and what they are able to do.

All the Single Ladies: Unmarried Women and the Rise of an Independent Nation (Rebecca Traister)

On a scale of 1 to 5 wedding rings, I give this 3 fully-formed individual women.

A nuanced investigation into the sexual, economic, and emotional lives of women in America. In a provocative, groundbreaking work, National Magazine Award finalist Rebecca Traister, “the most brilliant voice on feminism in the country” (Anne Lamott), traces the history of unmarried and late-married women in America who, through social, political, and economic means, have radically shaped our nation.

HOW IT MADE ME FEEL:

The books is full of fascinating facts, stats, and stories, but I pulled out just a few of my favorites…

First, the advice in the appendix on what is needed to make single women truly equal in America reminded me a lot of The Year of Living Danishly – and what makes people in that country so happy. Essentially, we need better policies including stronger equal pay protections, national healthcare system, mandatory parental and sick leave, and welfare benefits. And, of course, we need to “protect reproductive rights, access to birth control, and sex education.” Just something to chew over…

Another stat that stood out to me as someone who is definitely not ready to get married yet: “The ‘Knot Yet Report,’ published in 2013, reported that a college educated woman who delays married until her thirties will earn $18,000 more per year than an equivalently educated woman who marries in her twenties.” Gimme that cheddar, yo!

And finally, Amelia Earhart’s plea to her husband after she turned down his proposals several times: “You must know again my reluctance to marry, my feeling that I shatter thereby chances in work which means most to me… Please let us not interfere with the other’s work or play, nor let the world see our private joys or disagreements. In this connection I may have to keep some place where I can go to be myself, now and then, for I cannot guarantee to endure at all times the confinement of even an attractive cage.” Might be going into my wedding vows.

Highly recommended for people looking to learn a little bit more about history and a lot more about being a woman.

On January 20, 2017, I semi-watched the 45th President get inaugurated with a pit of fear in my stomach.

On January 21, 2017, I joined 150,000+ humans in Boston Common as we gathered and drew strength from each other. We listened to the inspirational messages from our government representatives fighting for our basic human rights, and leaders of groups and movements from across Massachusetts. 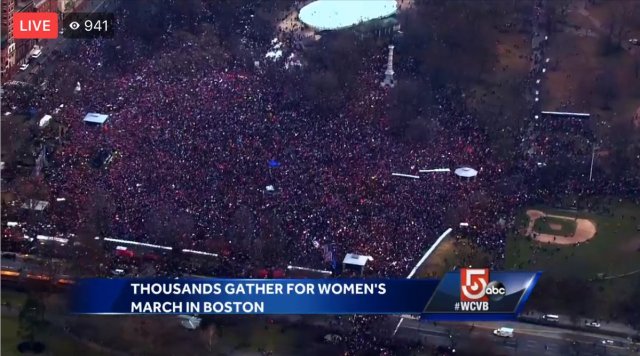 I didn’t participate in the march itself (just the rally) due to time constraints, but I did do my own personal 1 mile march from my subway stop to my home reflecting on the day and on the days following. Over and over, we’ve been hearing that this march isn’t enough. It’s a wonderful show of unity, as over 3 million people in every continent (including Antarctica!) came together to demonstrate for basic human rights and dignity. But just as important is staying informed (and keeping intersectionality front and center), staying loud, and staying involved. Here’s how I’m going to do that.

I’m trying to get out of my liberal echo chamber by challenging myself to read books and articles that explore the nuances of all of America – not just the America I live in.

I’m also trying to grow my own intersectional feminism through informed research and exploration. Two podcasts that are helping me do that, and understand the fight women have had for generations and the fights we are still conducting, are Stuff Mom Never Told You and Call Your Girlfriend.

I’ve saved the numbers of my government representatives in my phone and plan to be on a first name basis with their staff. I’m thankful that my representatives reflect my viewpoints that A) Cabinet officials should have a basic understanding of the job they are seeking; B) women’s rights are human rights; C) science is real; and D) universal health care is crucial to save people’s lives. But I still want to stay loud by thanking them for representing the rights of everyone, not just those who give them the most money, and also to ask what I could be doing to support them.

The day after the election, I set up a reoccurring donation to Planned Parenthood, an organization that has saved millions of women’s lives and continues to be a top defender for human health and human rights – and personally has been an excellent educational resource for me.

In addition to donating my money, I’m going to be donating my time. I’ve been discouraged trying to find the best place that fits my abilities – with an unpredictable travel schedule, it’s tough for me to find somewhere that is okay with a non-weekly commitment, especially since many places prefer you to volunteer during the workday. But, on my personal march I reflected on the issues that are of crucial importance in my life and decided women’s rights fit that for me.

And so, I’m learning more about the Boston Doula Project, which provides compassionate support to women experiencing abortion and pregnancy loss. I’ve also signed up to volunteer at a women’s shelter that allows for unpredictable volunteer sign-up, and I’m going to work with my employer to see if they will allow me to take off 1 or 2 half-days per month for this commitment. 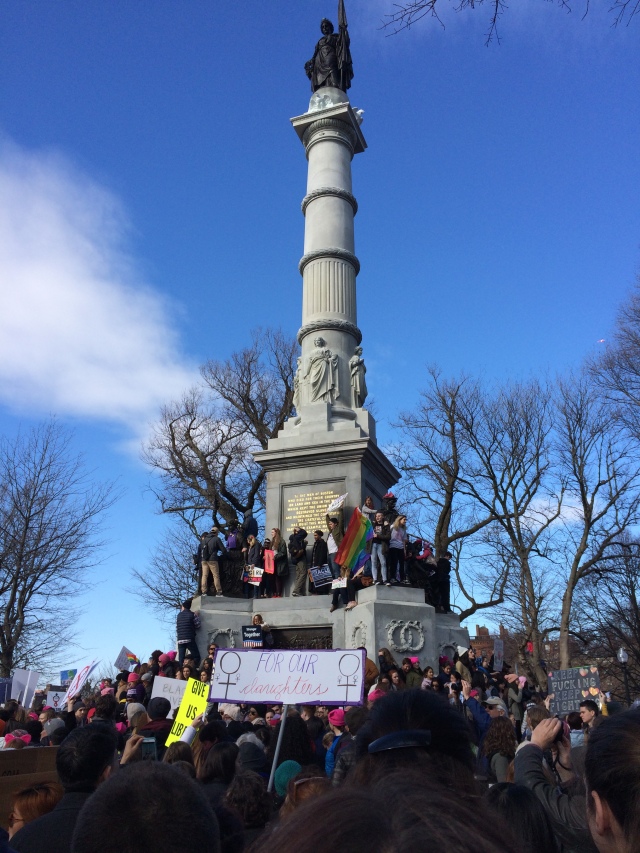 I marched on Saturday for a lot of reasons, and my feet continue to carry me now towards positive change and peaceful resistance to a kleptocracy.

Originally I had titled this post something like “strong female characters are the worst,” because I truly hate when people praise a piece of media like a book or movie because of the “strong female lead.” Have you ever in your life heard the phrase “strong male lead?” No, because it is assumed when you say “male character” that said character will be strong, capable, probably handsome, and generally will save the day. (You only have different than the stock male lead when you specifically qualify it such as by saying “nerdy male character”) (and, of course, this in and of itself is problematic, because it is presuming that there is no overlap between nerdy and strong).

And yet. It seems to me, and to a lot of people on the internet that share my opinion, the stock female character is a simpering damsel in distress. If you say “female lead” more likely than not she will be a second to the (strong) male lead. You must specify that actually, your character is different from others because she is strong.

And that is bullshit. Thank you, Star Wars, for finally getting a female lead in your movies who is more than a princess, but everyone stop saying she’s “strong.” She just IS.

Anyway, other people have said this better than me, and I’m so enraged today I’d rather segue this into something else: people hate women. This is just a thing. Don’t be shocked. The evidence is there, and persistent, and pervasive, and tiring. (And I’m saying this from a relative place of privilege as a cis, straight, white, middle-class individual). Nowhere is this more evident than the 2016 United States presidential election wherein a misogynistic, jingoistic, racist, xenophobic, demagogic known sexual predator won over one of the most qualified presidential candidates in recent history who happens to have a vagina.

Don’t give me any bullshit about why you voted for the demagogue (“I’M not a racist! I just like people who are!”). I’m sure that is perfectly true for a wide swath of the population – at least, I have to hope so, because otherwise this country truly is going to hell – but the cold, hard, fact is that women are treated with suspicion when anyone has a hint at their strength. A female lead is supposed to be nurturing; a strong female lead is someone who doesn’t know her place.

I just finished Lean In and learned about the Heidi/Howard study and I can’t stop thinking about it. Harvard Business School did a case study in which two groups of students were given a description of a successful entrepreneur. One group was told the entrepreneur’s name was Heidi; the other group was told Howard. The students rated Howard more positively, saying he seemed to be a more “appealing” colleague, where Heidi was seen as selfish and not someone who you would want to work with. This was literally the same (fictional) person – the only difference was in gender.

I have so much more than I could say about this, but I’m trying to stop dwelling on why people hate women (or, in general, those who are a different color/religion/culture/gender identity/sexuality than “what a normal American is”) and focus instead on the future. I’m setting up recurring donations to women’s rights organizations and actively seeking volunteer opportunities with the National Organization for Women, NARAL, and immigrant/refugee support centers. I can’t do a lot, but I can do this.

Also, screw you if you say a book is good because it has a “strong female lead” but here are some awesome pieces of art that have/are written by just normal, strong, flawed, funny females. This is by no means an exhaustive list – just what I pulled from books I’ve read in the last year or so – so please comment with anything else  I should add to my TBR pile: